On September 7, 1949, Pixie Pixler was born eight weeks prematurely at a time when many preemies didn’t survive. Even though born premature, Pixie seemed perfectly healthy and happy. It wasn’t until she turned a year old when she began to have recurrent infections that caused her to have her tonsils removed. Despite becoming sick on numerous occasions and needing much more sleep than her other four siblings, Pixie lived a normal life attending public schools in northern Illinois, going to college in southeastern Wisconsin, and moving to Minnesota to get married and continue Master’s course work. While working on her Masters, she began teaching and raising a family. 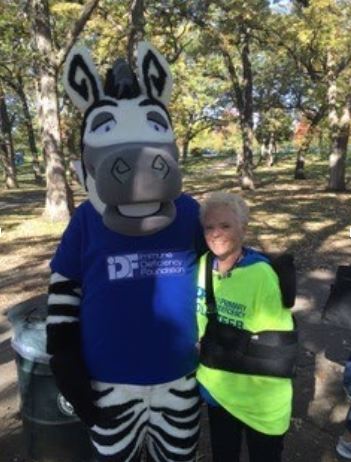 At the start of Pixie’s career, she bounced around, teaching in various rural and suburban districts until she landed in a large urban school district where she spent teaching for 22 years. As Pixie taught through the years, she began to have more persistent infections. Pixie states, “I had almost continuous infections October through May those last five years of teaching.” These infections eventually caused her to take a short and then long term disability leave in 2007.

A year after going on long term disability, Pixie was diagnosed with Common Variable Immune Deficiency (CVID) after receiving an intake and lab draw of 39 vials. A month later, she received her first treatment of intravenous immunoglobulin (IVIG) and learned about the Immune Deficiency Foundation (IDF). Pixie says, “I was 59, and I was so relieved to finally have some answers, but also had so many questions.”

Over the years, Pixie has received many answers to the questions she’d been craving to receive. She became actively involved in IDF by volunteering and attending conferences.

Pixie states, “I don’t know where I’d be, or how I would have coped without the support of IDF. I am so much better informed, less anxious, and healthy because of my involvement. I want IDF to be there and continue their great work.”

As a thank you, this year, Pixie has donated $800 towards IDF. She says, “This year, I donated more than I ever have to IDF because they are doing so much for us that no one else is…. advocating, educating, supporting, and connecting us. So many activities that would have impacted my budget this year have not been available, so I have the means to donate more, which I hope to continue in the coming years.”

Thank you, Pixie, for your continuous support. We appreciate all you have done for IDF, and we hope to continue to serve the PI community for many more years to come.

Ten Ways to Make a Difference this National PI Awareness Month
Since You Asked: Question & Answer (June 2018)
Co-Pay Accumulators: What Are They and How Do They Affect You?
2018 IDF Research Grant Awardees
View All News

There are currently no videos.