Genetics and the Immune System

Genetics and the Immune System

Problems in the genetic code cause primary immunodeficiency, and while we can’t identify all the genes connected to the more than 400 disorders which affect the immune system, we do at least know some of them. And that’s a start, according to Dr. Lori Broderick, an allergist/immunologist at Rady Children’s Hospital San Diego and assistant professor of pediatrics at the University of California San Diego. 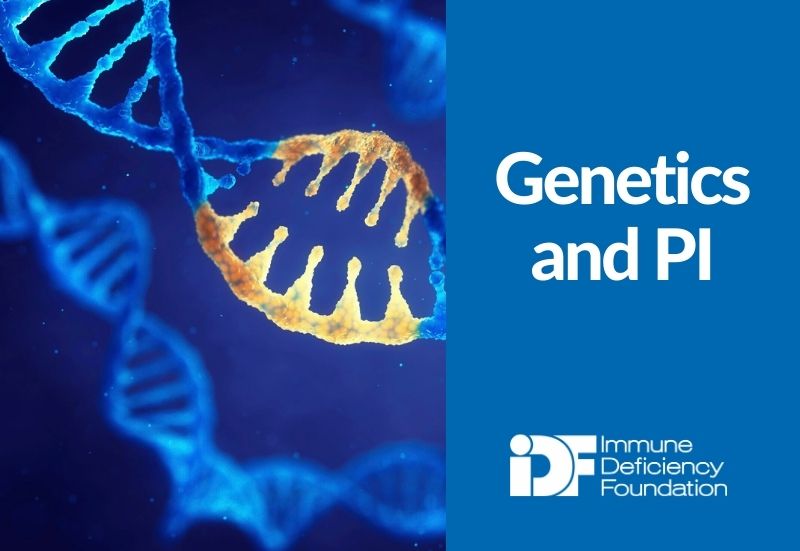 In a recent IDF Forum, “Genetics and Primary Immunodeficiency,” Dr. Broderick provided an overview of genes and the immune system, an introduction to genetics, and a discussion of genetics and primary immunodeficiency relate to one another, and the benefits and limitations of genetic testing for PI.

Dr. Broderick said not until the early 1990s did researchers publish a paper describing a genetic cause for a PI. Studies at that time concluded that a faulty gene prevented cells from producing immunoglobulin, resulting in X-linked agammaglobulinemia.

“The reason this is important is because the immunologic field is still fairly young. We’re learning new things about the immune system and about genetics every single day,” said Dr. Broderick. “That doesn’t mean we still can’t approach treatments and approach improvement in the quality of life in the absence of a genetic diagnosis.”

Dr. Broderick said that while our immune system changes as we age, our genes remain largely the same. Genes determine:

Before understanding exactly what a gene is, said Dr. Broderick, we first have to understand DNA, or Deoxyribonucleic acid. DNA is a molecule that contains all of the information necessary to build and maintain an organism. Nearly every cell in a multicellular organism (such as humans) possesses the full set of DNA required for that organism.

The genes, made of DNA, are the functional unit of inheritance, passing along things we can track from one generation to the next. Genetic variants, or mutations, can occur anywhere in a gene and affect the outcome. There can be substitutions, insertions, deletions, or truncations in the genetic code.

So, how do people inherit genetic changes? Through inheritance patterns, which include:

“This happens in every person, and sometimes it leads to disease,” said Dr. Broderick.

Some PI’s have only one known gene, while others have many genes that cause the disorder. New genes that cause PI are still being identified. So, what does this mean for prognosis and treatment?

We can use genetic testing to help us:

“You don’t have to know the genetic defect to necessarily get treatment, but it can help you make decisions. Some genetic variants affect prognosis because some types of mutations may be more severe, and some carriers may have symptoms,” said Dr. Broderick

Dr. Broderick used severe combined immunodeficiency, or SCID, as an example of how the type of mutation and the exact variant can have implications for the type of therapy. Certain types of SCID may be treated successfully with hematopoietic stem cell transplant

, or HSCT, while others respond better to gene therapy.

“It changes how you think of your different options if you know what specific mutation you have,” said Dr. Broderick.

“Family history may reveal the inheritance pattern. So if you and your father, for example, had a similar disease, we could say maybe you inherited it from him. Still, disease penetrance varies, so depending on the type of mutation you have, the amount of residual function you have, people may not be affected with the same degree of severity,” said Dr. Broderick.

Family history may reveal the inheritance pattern, but:

To probe further into diagnosis, there are several genetic tests available. The decision to move forward with genetic testing should be based on clinical history and other testing results and what would be the most informative for your particular situation explained Dr. Broderick.

There are also challenges associated with genetic testing. It can be expensive, insurance may not cover the cost, and interpretation of the results can be complicated.

“All have a 20 percent success rate, meaning that if you get a genetic test, there’s a 20 percent chance that you will get an answer that makes sense,” said Dr. Broderick. “We still are learning things about genetics every day.”